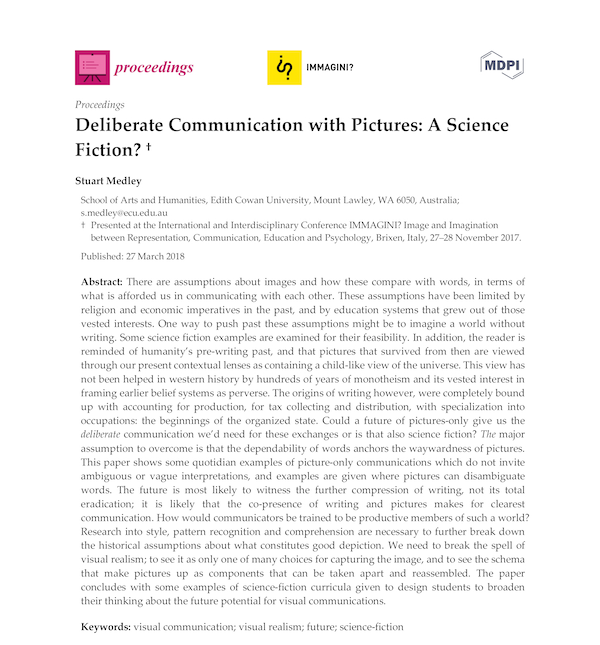 The future is most likely to witness the further compression of writing, not its total eradication; it is likely that the co-presence of writing and pictures makes for clearest communication. How would communicators be trained to be productive members of such a world?

Contracts, once almost exclusively written by lawyers for lawyers, are undergoing a major transformation. Technology and design have enabled entirely new contract genres. When the focus shifts from legal issues to functionality and ease of use, automation and communication come to the fore. We envision a future where contracts are designed to contain code, text, sound, visuals, comics, and more. They work for both computers and humans, on and off screen: they can auto-execute desired terms as well as guide human behavior toward more collaborative and productive ends.

Where are the Graphics? Communicating Legal Ideas Effectively Using Images and Symbols

Incorporating visual elements in legal writing can be beneficial in demystifying the law by providing easy-to-comprehend signposts, allowing easy navigation of lengthy or complex processes and documents.

Read the full article by Tania Leiman for the Legal Education Review HERE.

Integrative deal design: Cascading from goal-hierachies to negotiations and contracting 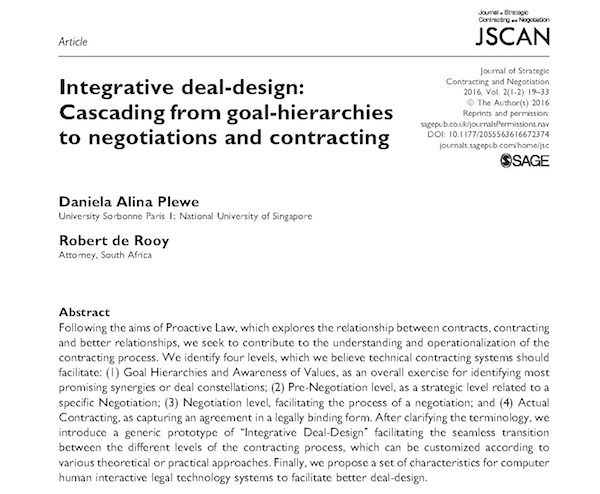 Following the aims of Proactive Law, which explores the relationship between contracts, contracting and better relationships, we seek to contribute to the understanding and operationalization of the contracting process. We identify four levels, which we believe technical contracting systems should facilitate: (1) Goal Hierarchies and Awareness of Values, as an overall exercise for identifying most promising synergies or deal constellations; (2) Pre-Negotiation level, as a strategic level related to a specific Negotiation; (3) Negotiation level, facilitating the process of a negotiation; and (4) Actual Contracting, as capturing an agreement in a legally binding form. After clarifying the terminology, we introduce a generic prototype of ‘‘Integrative Deal-Design’’ facilitating the seamless transition between the different levels of the contracting process, which can be customized according to various theoretical or practical approaches. Finally, we propose a set of characteristics for computer human interactive legal technology systems to facilitate better deal-design.

Next Generation Deal Design: Comics and Visual Platforms for Contracting

Major gaps may exist between the legal representation of an agreement (“the paper deal”) and the goals and intentions of its negotiators (“the real deal”). This paper outlines contracting pitfalls and proposes new approaches to the use of visualisation to overcome them. We categorise contract visualisation and introduce comics and visual interfaces for deal-making as examples of two new categories. These approaches open new possibilities for the future for both theory and practice. They also contribute to next generation deal design as a way to narrow the gaps between the real deal and the paper deal, turning contracts into user-friendly communication tools that reflect the true will of the parties.